After continuously increasing over the previous five months, sales for two-wheeler EVs saw a slight decline in November. According to figures released by Vahan on December 1st, the actual number of EVs registrations in the sector decreased by 1% to 76,163 vehicles in November against 76,953 in October. Compared to such growth in October, this was a stark difference. In October, EV (2w) registrations increased month-to-month (MoM) by more than 42%. The result can be explained due to one reason. October was a festival month that directly impacted that month's sales numbers. It is a normal phenomenon in the automobile industry. Festive months boost the sales chart at an extraordinary level and then return to its ordinary phase after its end.

But this minute drop can be overlooked, as EV sales have been rising for the past few months. The month of November also experienced the rapidly expanding EV two-wheeler market in India, as sales surpassed 75,000 units for the second straight month. In all, more E2W registrations have been made in the past two months than in the entire year of 2021. This is directly attributed to the introduction of the FAME II subsidy last year. With the additional subsidies provided by each state, the costs of EVs further went down, which added to the increased demand this year. Take Ampere, for example; Under the new pricing, the company's Magnus model is now available for Rs 47,990, down from Rs 74,990 earlier.

On the chart of sales volume, Ola Electric came in #1. A slight improvement over the 16,129 sales in October, the business shipped 16,246 S1 scooters in November 2022. Bhavish Aggarwal, the CEO of Ola Electric, claimed in a tweet that the EV company delivered almost 20,000 electric scooters for the second month in a row and that E2Ws now account for 90% of the market for luxury scooters. The market share growth can be attributed to the introduction of S1 Air; the firm has now expanded into the under 1 lakh budget market segment. This move enabled OLA to gain market shares from not only the luxury sector but also managed to penetrate the budget sector. Ola opened 14 experience centres throughout 11 cities in the same month, increasing its tangible form to almost 50 locations.

In November, Ampere EV saw a significant increase in its Electric vehicle sales. The firm is ranked second in the sales chart, with 12,232 electric scooters purchased. A roadblock for Okinawa Autotech helped Ampere reach second place on the list. In November, Okinawa's EV registrations dropped to 9,038 units, a 36% decrease from October's 14,121 units. As a result of being investigated for suspected FAME-II policy breaches and having subsidy payments halted, Okinawa has now been obliged to jack up the prices of its EVs by up to Rs 64,000. But as we all know, Okinawa has been one of the big three firms for the EV market in India, with the largest distribution network. The company could retain the Fame II subsidy soon, which would result in favour of the firm and would again help it regain its pace towards being one of the top EV manufacturers in India.

Hero Electric's sales marginally increased in November, but with 9,008 units sold, the former top seller missed moving up to the third spot on the list. TVS increased its iQube electric scooter sales and distributed 10,056 units to dealers in November—the most iQubes manufactured in a given month. The total number of registrations stood at 8,076 units, as it claimed fifth place in November. The growth in the sales tally would be credited to its B2B sales strategy. In June 2022, Hero Electric signed a partnership with Zipp - An Ev-focused last-mile delivery service firm. Hero Electric claimed it would deploy 1.5 lakh electric scooters for Zypp Electric in the next three years. The star of this deal was its best B2B product, The Hero Nyx.

Sixth on the sales chart, Ather had 7,741 shipments in November. Demand for the freshly released Gen 3 450X is significant. Ather raised its yearly production capability to 420,000 units and constructed a new manufacturing facility in Hosur, Tamil Nadu, to meet the growing market. Still, the growth is slow and steady for Ather. Unlike companies like OLA, a fast-pacing rabbit, Ather can be a tortoise - slow yet steady. But who knows? We all know the story of Rabbit & the tortoise.

Additionally, TVS saw a rise in EV sales. In November 2022, the business reported its most substantial monthly sales of 8,073. Although, Bajaj shipped 2,987 Chetak electric scooters, a drop from the October sales of 3265 units, again because of the festive phenomena.

While growing, companies like Kinetic Green experienced a sharp growth of 60% compared to last month's sales. It sold 838 units, far more than the October sales of 333 units. However, startup firm Okaya saw a dip in its sale from 1966 units to 1783 units in November. In contrast, firms like Pure EV & Revolt are experiencing a sharp downfall in their sales charts.

The rivalry among firms is growing due to the market for EVs. Businesses are continuously developing and creating better things. Additionally, startup companies are joining the market. In November, India's first gear-equipped electric motorbike was introduced by Ahmedabad-based tech-firm Matter. It has a 4-speed transmission and dual-channel ABS. A 10.5 kW of power by the electric motor and a 5 kWh first-in-line liquid-cooled battery are included with the motorbike. Depending on the pace, it will range between 125 and 150 kilometres. 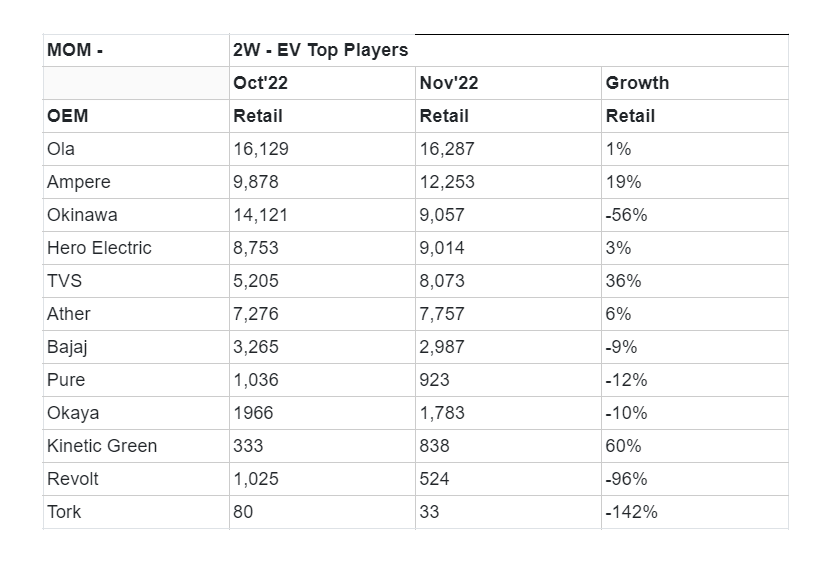 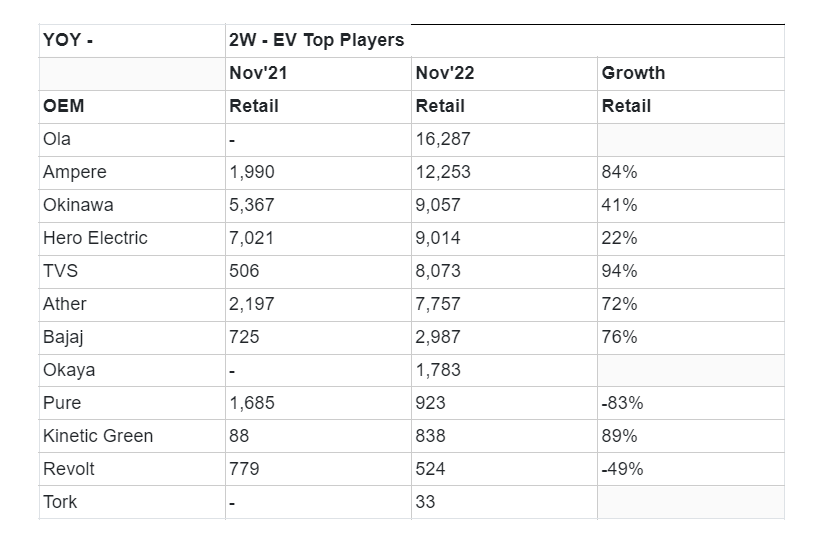 he Hyderabad-based firm, Pure EV is one of the competing EV manufacturers in the Indian EV market. Let's analyze Pure EV's products launched in the Indian Market.

BGauss is an ideal vehicle that is available at the booking price of Rs.499 and ex-showroom price of Rs. 84K. In this blog you'll know is this right electric scooter in the price brakcet of Rs77K-88K

President of India announces EV-YATRA Portal on national energy conservation day 14 December 2022, in this blog you are also provided with the website of BEE to access EV YATRA Portal

We Founder circle, invest another $4 million in Oben Electric.

Luxury EV market in India over the year

The EV industry is growing at a quick pace in India. With it, not only budget scooters but also premium EV's are entering the Luxury two-wheeler market segment.

Oben Rorr features the most powerful motor on an electric bike in India, the longest range, and one of its kind battery storage with heat control. But will Oben's first electric motorbike match up to expectations? Lets find out more....

A list of the most exciting luxury electric cars launching in India by 2023. Big players like BMW, Mercedes-Benz, and Audi have a new electric fleet and we have the details for you.